“ If you look at healthcare today, it’s all about disease. It’s not about understanding wellness at all. “
– Leroy Hood

THIS ISSUE’S TESTIMONIAL:  ( My son is walking heel to toe ) 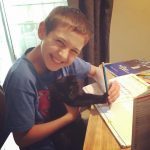 ” Hello Mr. Thomas, I wanted to tell you that Gina LaVerde gifted me with a bottle of BAC for my son. He took one capsule for twenty days straight. His language skills have increased with proper use of pronouns and he is now using conjunction words most of the time. I noticed today and the other day he was walking heel to toe instead of toe walking. Today he smiled and waved to me from across the trolley instead of no facial expression and no wave. He is also changing his tone and volume appropriately when he speaks. Thank you for your supplement! With love “

THE MARTIAL ART OF WELLNESS ( BAC Fends Off Viruses )

There are two ways to fend viruses; the “right” way and the “wrong” way. The “wrong” way will have you expect a vaccine or a shot or a cure or antibiotics all day long.  There are millions of potential viruses out there and most humans have survived them for a hundred thousand years. According to the “wrong” way theory, we would need a vaccine or specific cure for each virus; the pharmaceutical industry’s perfect scenario.  Do you know how many of us carry the herpes virus?  People are often surprised to learn how common this genital herpes (HSV-2) is. Looking at the data, over 42 million Americans would be in for a more personal “surprise” if they got tested for it today.  And that number is likely on the low side as other statistics estimate it at upwards of 40% of Americans.

Are you in the zone?

But why is it that most people don’t even know they  carry it, and go on living normal life with the occasional canker sore or flare up.  Did all these people get a vaccine?  The answer is NO.  There is no herpes vaccine.  So what is it?  I suggest it is the “right” way in action.  What is the right way? I propose that the “right” way is when your body’s life force and general cellular vitality/energy and resonance are in the 80-100% efficiency range. Our energy/resonance does not have to be perfect, but when below 80%, we are prey to colds, flus, bacterial and viral infections, hormonal imbalances and tumors. While when we are in the 80+ range, we fend off viruses, restore our homeostasis, and quench small tumors. Are you in the zone?

A case in point

In February 2004, Dr. Nita D., MD, a Boulder Colorado physician and wholistic practitioner had shared with me the case of Daniel and suggested we followed his progress together. Daniel had been diagnosed HIV positive several years earlier and was seeing his condition worsening alarmingly. His regular MD was suggesting medications.  Instead, Daniel decided to look for an alternative solution and met Dr. Nita. Following her recommendations to use BAC and to change his eating habits, Daniel saw his viral load dropped significantly in a few weeks. Daniel agreed to send me copies of his lab reports . Let me show you a perspective of continued progress in his own words:

” I am HIV positive. I just got my latest lab work back and it’s great! My viral load is stable at about 10,000 (the nurse practitioner said she was very surprised just how stable that it is), and my T-cells are up! To over 400. That’s the highest they’ve been in over a year. If you will recall, exactly one year ago my viral load was at 139,000 and the T-cells barely over 250, prompting the docs to want to start me on meds. But then I started the BAC.

I am especially impressed with the numbers because since October, when I returned from Brazil, I’ve been dealing with some very difficult emotions like grief, sadness, and some depression. There has been a lot of stress as I’ve tried to find a job (still looking). Also, I haven’t been very strict nutritionally as that has been difficult as well. Given these factors, I’m so thrilled that my numbers are so good. It gives me new energy and motivation to eat right, and continue trying to make good lifestyle choices. But I think if it weren’t for the bio-algae concentrates, the picture would look very different right now. Thank you! “

Daniel wrote soon after following a visit to his regular MD for lab works (his results were showing viral load at 17,000 and CD4 at 447):

“UPDATE – I just received my result from my regular MD. He says (Daniel, numbers look good. Get the test done again in 3 months)”

What does all this mean for Daniel?

First, let’s look at what does the test result mean? Viral load tests are reported as the number of HIV copies in a milliliter of blood. If the viral load measurement is high, it indicates that HIV is reproducing and that the disease will likely progress faster than if the viral load is low. A high viral load can be anywhere from 5,000 to 10,000 copies and can range as high as one million or more. A low viral load is usually between 200 to 500 copies, depending on the type of test used. This result indicates that HIV is not actively reproducing and that the risk of disease progression is low. A viral load result that reads “undetectable” does not mean that you are cured. It may mean that the level of HIV virus in your blood is below the threshold needed for detection by this test. Early viral load results from two large studies have recently been released. These studies found that the viral load test was a very good marker of disease progression. In these studies of around 1,700 people, viral load was better than CD4 cell counts at showing whether someone might be at risk for getting sicker.

Daniel so far has managed to reduce or stopped the progression of the disease, this without medications and their nasty side effects, long term damages and with just a few capsules of BAC per day along with easy changes to his diet. As commented by Daniel, he is doing well even if he has not been “perfect” in his diet and has been under a lot of stress.

It’s all about energy and resonance

How does BAC help with HIV?  Let me set the record straight.

A) It would be unfair to Daniel and to natural health to claim that BAC is a remedy for HIV. It would ignore Daniel’s “self healing power” and the power of “Let thy food be thy medicine”. It would remove Daniel’s responsibility to stop eating “badly” and to eat, exercise, rest and sleep well.  For the record, I am certain that applying these few disciplines alone have contributed to reduce his viral load.

B) BAC is a nutritional, and as such is not a cure for HIV nor for any  “disease” such as diabetes, alzheimer’s, fibromyalgia, etc.

So how does BAC help more than broccoli and parsley?

BAC is a pure whole food, the raw materials that the body needs for energy, growth, repair, protection and self healing from ALL diseases or conditions. Rather than explain the potential BAC’s ingredients and mechanism of action specific to HIV, let me remind you that the proper use of BAC will deliver via nutritional support some degree of protection and self-healing from any viral conditions like herpes, hepatitis A, B and C, West Nile virus, lymes disease, etc., and from the thousands of “named” diseases.

I invite you to read several sections on anti viral and immune support property of BAC at http://themagicisbac.com/ so that you understand the relationship between BAC’s extraordinary nutritional efficiency and the body’s innate capacity to health.

Click to read more on : BAC testimonials and cases

How does BAC compare to other algae? http://quantumleapwellness.com/blog.html/news/how-does-bac-compare-to-other-algae/