” Early studies demonstrating the ability of dietary carotenes to prevent infections have left open the possibility that the action of these carotenoids may be through their prior conversion to vitamin A. Subsequent studies to demonstrate the specific action of dietary carotenoids have used carotenoids without provitamin A activity such as lutein, canthaxanthin, lycopene and astaxanthin. In fact, these nonprovitamin A carotenoids were as active, and at times more active, than beta-carotene in enhancing cell-mediated and humoral immune response in animals and humans. Another approach to study the possible specific role of dietary carotenoids has used animals that are inefficient converters of carotenoids to vitamin A, for example the domestic cat. Results have similarly shown immuno-enhancement by nonprovitamin A carotenoids, based either on the relative activity or on the type of immune response affected compared to beta-carotene. Certain carotenoids, acting as antioxidants, can potentially reduce the toxic effects of reactive oxygen species (ROS). These ROS, and therefore carotenoids, have been implicated in the etiology of diseases such as cancer, cardiovascular and neurodegenerative diseases and aging. Recent studies on the role of carotenoids in gene regulation, apoptosis and angiogenesis have advanced our knowledge on the possible mechanism by which carotenoids regulate immune function and cancer. “

THIS ISSUE’S TESTIMONIAL:  ( Fighting off a virus that quickly… is practically unheard of… )

” We met briefly at the conference in Colorado this past August.  I wanted to share with you that I believe my immune system is responding very nicely to the BAC F3 formula (history of breast cancer) since beginning to take it back in April of this year.  In fact, my partner has just been sick for the past week, complete with fever and chest and head congestion, as well as a few other people we know.  I typically will catch EVERYTHING that everyone else has, especially if we’re under the same roof! This time around, though, I felt only the very slightest signs from my body that I was fighting something off, a bit of increased mucous drip in the back of my throat occasionally, not excessive, just sort of “there” and making itself known.  I took a couple extra BAC capsules that day, a bit more water, took it easier exercising, went to bed early, and by the next morning, VOILA! I felt fine with no further problems whatsoever! It never developed into anything more than what I just described!

Fighting off a virus that quickly and painlessly is practically unheard of for me! I have to think that taking the F3 faithfully now at 6 capsules per day for the past 6 months does have something to do with it. I will close here as I need to get back to work but was just so happy that I didn’t come down with what everybody else was getting this past week that I had to share the good news. It’s time to order another bottle of BAC, and that’s #1 on the to-do list today! “

THE MARTIAL ART OF WELLNESS ( BAC to Immunity )

In the Quantum Leap Wellness series, we demonstrate how health can be simple while diseases can be complex. We write about common sense solutions that can frequently be FREE and will save you money today and significantly reduce your future health costs.

This month, I will share with you a portion of a page of the book “The Magic is BAC” available online at www.themagicisbac.com. I will write about the “Powerful immunity and toxin shield benefits of Bio-Algae Concentrates (BAC)”. I urge you to read the entire online ebook at http://www.themagicisbac.com/ 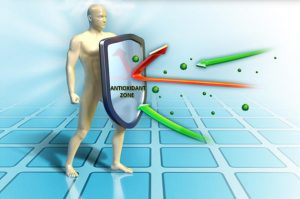 While the protein, mineral and vitamin values of Bio-Algae Concentrates (BAC) are impressive, these minute algae organisms are also rich in pigments that are biochemically as important to health. Without these pigments, our body could not synthesize many of the enzymes necessary for balancing metabolism. BAC contains a high level of enzymatic pigments and mixed carotenoids. In recent years, these pigments and carotenoids have received a tremendous amount of attention as potential anticancer and anti-aging compounds.

Carotenoids are powerful antioxidants, protecting the cells of the body from damage caused by free radicals. Carotenoids and specifically beta-carotene and alpha-carotene are also believed to enhance the function of the immune system. Carotenoids represent one of the most widespread groups of naturally occurring pigments. These compounds are largely responsible for the red, yellow, and orange color of fruits and vegetables, and are also found in many dark green vegetables. The most abundant carotenoids in the North American diet are beta-carotene, alpha-carotene, gamma-carotene, lycopene, lutein, beta-cryptoxanthin, zeaxanthin, and astaxanthin.

True vitamin A is found in the pre-formed state only in animal sources, such as liver. This is the form of vitamin A sometimes associated with toxicity and overdose since it is fat-soluble and is not readily excreted from the body.

Some substances in plant foods are not true vitamins, but provide the precursors from which the body can then synthesize the appropriate vitamins. The carotenoid compounds of BAC are of this nature since they are used to produce pro-vitamin A.  For example, β-carotene, which has only about 1/6 the biological activity of retinol (vitamin A); the body uses an enzyme to convert β-carotene to retinol. In other contexts, both β-carotene and retinol are simply considered to be different forms of vitamin A.

In contrast to animal source vitamin A, the carotenoid complexes found in BAC are converted to vitamin A only as it is needed, thus minimizing the dangers of toxicity. In nature, algae are a primary source of vitamin A precursors – it is from algae carotenoids that fish livers derive and concentrate vitamin A.

Until late in the 20th Century, the functions of these carotenoids were discussed only in terms of their potential vitamin A activity. But since it has been discovered that certain members of the carotenoid family, approximately 50 carotenoids of the known 600, are called “pro vitamin A” compounds because the body can convert them into retinol, an active form of vitamin A.

BAC contains many of these yellow/orange pigments from which pro and pro-pro-vitamin A can be made : 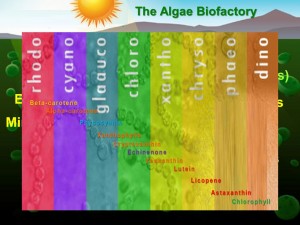 There are many carotenoids in BAC covering the vibrational energy spectrum

These and several lesser pigments such as phycoerythrin, tetrapyrrole, Phytonadione and the carotenoids are not just the “color” of living organisms but are used to carry on metabolic processes throughout the body. Without them, enzymatic reactions would be reduced until cellular disintegration occurred.

To illustrate my point I will focus on Astaxanthin, the king of carotenoids

Astaxanthin present in BAC is a pigment of the carotenoid complex found in the microalgae Haematococcus Pluvialis. It is an oxygenated pigment called a xanthophyll. Its unique molecular structure gives it a superior antioxidant capacity.

Astaxanthin is most effective against Lipoperoxidation in membrane models

Astaxanthin is 40 times more effective as an antioxidant than b-carotene, 500 to 1000 times more effective in inhibiting lipid peroxidation as an antioxidant than Vitamin E, has greater anti-inflammatory capability than Vitamin E, has almost 4 times the antioxidant capacity of lutein, is superior protection against UVA and UVB light-induced oxidative stress, is more stable in scavenging and quenching than b-carotene, canthaxanthin and zeaxanthin, is highly potent in enhancing T1 and T2 helper cells and IgM and IgG (secondary immunity) production, is more effective than lycopene and lutein in enhancing liver microsome detoxification activity (enzymes that metabolize drugs), enhances the actions of Vitamins C and E in the body, and enhances the release of retinol (Vitamin A) from the liver when needed.

There is a substantial body of literature including in vitro studies, preclinical studies and several human clinical trials that show that Astaxanthin, with its unique molecular structure and resulting potent antioxidant activity, may be an effective therapeutic modality for a variety of conditions, including cardiovascular, immune, anti-inflammatory, and neurodegenerative disorders.

Independent of the Soviet studies, there have been numerous preclinical in vivo and in vitro studies and several human clinical trials to evaluate the efficacy of Astaxanthin.

Astaxanthin has been shown to inhibit lipid peroxidation at the cell level thus protecting the cell membrane and the mitochondrial membrane within the cell; cross the blood-brain barrier which makes it available to the eye, brain and central nervous system to alleviate oxidative stress that contributes to ocular and neurodegenerative diseases such as glaucoma and Alzheimer’s; and to provide significantly more antioxidant capacity than other carotenoids and antioxidants, such as beta-carotene and Vitamin E.

Astaxanthin has also been shown to entrap free radicals by adding them to its long, double-bonded chain.

Rather than donating an electron, astaxanthin stabilizes the cell membrane, somewhat acting as a bridge in that its polar end groups span the cell membrane thus increasing its rigidity and mechanical strength, neutralizing singlet and triplet oxygen generated by UVA and UVB radiation and other sources, binding to a lipoprotein – an efficient transport vehicle – thus making it more bioavailable, and increasing immune system function, including heightened production of antibody-secreting cells and Interleukin 2 and suppression of Interferon-gamma. 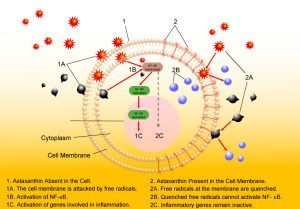 Within the xanthophylls, the Astaxanthin molecule contains the longest conjugated, double-bond polyene chain along with both hydroxy and carbonyl groups at each end. This configuration supports the greatest antioxidant capacity, its peroxyl radical chain-breaking abilities, its incorporation of free radicals into its polyene chain thereby more effectively trapping them, and its enhancement of Vitamin C as an antioxidant.

While other carotenoids and antioxidants may perform one or two of these functions, Astaxanthin does them all and, in most cases, does them better. In addition to entrapping free radicals, Astaxanthin also de-charges singlet and triplet oxygen and inhibits reactive oxygen, giving it anti-inflammatory properties.