– Nei Ching or The yellow emperor’s book of internal medicine

“Hello, Just a quick note to let you know that when my sister and her husband from Arizona were visiting, I gave them the booklet and my brother in law tried some of the bio-algae capsules. He was so cute cuz he said it is like manna from heaven, and that is exactly what I thought too. God bless…. ” 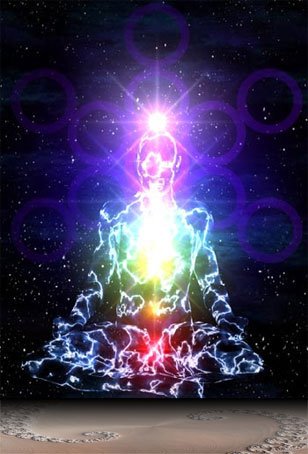 Last month I introduced Energy Medicine as another useful “arrow” in your arsenal. Let me remind you that Energy Medicine is as real (or more) as pharmaceutical medicine, except that it is often more effective and without nasty side effects. There are many types and usage modality of Energy Medicine. This month I want you to learn about SCENAR technology which falls into the electromagnetic medicine that utilize energy regulating devices. This area of medicine is likely the most promising of future in medicine.

SCENAR is an acronym for Self Controlling Energo-Neuro Adaptive Regulation, and denotes both a therapy and the advanced medical treatment device with which this therapy is applied. It is one of the most effective, non-invasive, pain-relieving tools available today.

It has an impeccable pedigree because of its start from the TENS machine concept : the gifted genius inventor of SCENAR, Alexander Karasev, found TENS not flexible and powerful enough to deal with the type of disorder that was affecting a member of his family, and so decided to improve on TENS. And as the saying goes, the rest is history… not only has he gone on to design increasingly sophisticated SCENAR devices, but all devices that can be classed as SCENAR technology-based in one form or another derrive from one of his devices.

At its simplest, the SCENAR device is used by the operator to assist a person’s body to re-activate its self-regulatory mechanism which was pushed out of equilibrium by an accident or disease. There is no diagnostic in the conventional medical sense involved – the body, via the SCENAR device and its trained operator, will itself indicate what it needs for self-healing. This self-regulation is achieved by the body’s neuropeptides, sometimes called the body’s very own in-built pharmacy, being stimulated into action by the SCENAR. device and appropriate treatment protocols. 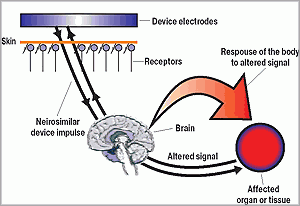 Working on the surface of the skin, SCENAR finds and then treats pathological skin spots, concerned with disease. These skin areas are called “asymmetry” or “trigger points” or “deviation points” or “physical points requires treatment”. The skin is one of the main informational organs of the body. The skin develops together with the nervous system from the same leaf of the fetus during the very first period of fetal life. Some Russian scientists call skin “peripheral brain”.

Although SCENAR makes no claims beyond its ability most effectively to deal with pain, the stimulation of the body’s own self-regulatory mechanism can bring about some of the powerful changes the body may require on its way back to a state of balance (homoeostasis). Indeed, 30 plus years of experience in Russia has demonstrated this time and time again. The processes under which these beneficial effects are achieved are taught by ISTA-registered trainers at the advanced levels of SCENAR training.

Because of its effectiveness in dealing with pain, SCENAR is sometimes wrongly confused with the TENS machine, which blocks pain; SCENAR, which evolved from TENS, on the other hand stimulates the body into self-regulating away the cause of the pain. SCENAR technology seeks through the device to emulate a living system which in dialogue with another living system triggers the processes necessary for self-stimulating the body back into a balanced, healthy state.

The theories underlying scenar therapy draw on Functional Medicine, as well as traditional Chinese medicine, and centre on the concept that the human body is a finely tuned functional system continually maintaining itself in balance (homeostasis). Normally the body adapts in a self-regulatory manner to the stimuli reaching it from both internal and external sources, making it a dynamic but stable system. When something disrupts this adaptive process, e.g. trauma or disease, balance is lost and the self-regulating process may need to be re-started through an external catalyst, such as scenar.

Scenar therapy is a complex form of electrotherapy which delivers specific electrical stimulation impulses to the body via in-built and/or remote electrodes in direct contact with the skin’s surface. The impulses mimic the electrical signals produced by the patient’s nervous system so as to stimulate the organism to heal itself with optimum efficiency and safety. By bringing the scenar device into contact with the patient’s skin, bio-feedback from the presenting pain / disease dynamics (or lack of them) will determine the appropriate impulses. They will be specific to each patient and at any given time. Scenar’s actions aim at both the “fast” pain-blocking A-fibres and the “slow” pain producing and peptide generating C-fibres.

Explained at its simplest, the scenar’s sophisticated circuitry “listens” to the patient’s body and then determines the most appropriate signals and dosages that, in any given instance, need to be provided to stimulate self-healing. The body’s self-healing is effected through neuro- and other peptides, sometimes described as the body’s in-built pharmacy. The dosed signal stream, consisting of waveform, signal strength and frequency, can be varied, either by pre-selection, by the scenar therapist, or automatically, by the control circuitry of the device. The automatic process can be overridden by the scenar therapist with guidance from visual indicators, which can emanate from the device, either as numeric or colour-coded LED displays, or both, and as sound signals, or from direct indicators from the patient’s skin. The experienced therapist can draw on a comprehensive range of treatment variations to deal with both acute and chronic conditions.

Scenar therapy can alleviate chronic and acute pain in a wide variety of circumstances, and is therefore approved as a pain relieving therapy in most Western countries and throughout Eastern Europe. Russian practitioners, with a much deeper and longer experience of Scenar than any of their Western counterparts, lay claim to a much wider range of healing successes, additional to the treatment of pain. In fact SNENAR is a highly sophisticated device designed to be an informational analogue to a living system. Scenar is now an approved subject for continuing professional development (CPD) amongst some German doctors and attracts 2/3 of one year’s CPD-points.

30 years ago a group of Russian scientists, engineers and physicians, commenced development work on the concept of scenar invented by Alexander Karasev. They set themselves the task to design a non-invasive, portable treatment device, perhaps even suitable to accompany cosmonauts into space. Following extensive clinical and technical trials, scenar (sometimes spelt with a “k”) in 1986 was approved by the USSR Medical Council for use both in hospitals and the home.

Since its invention, many myths and stories have grown up around SCENAR and, from the perspective of each narrator, it is acurate. The (ISTA) International SCENAR Technology Association’s position of neutral reporting, has asked the men and women who have been involved in making SCENAR’s history to give their version of what they witnessed or helped create.

Pelicans, Coconuts & Butterflies by Ani Kaspar takes us on a remarkable journey of self-discovery: This is Ani’s intimate story of healing, an extraordinary story of a woman’s courage in the face of death, her commitment to an unbounded life and her blossoming compassion on a pioneering path of discovery. Ani’s journey through breast cancer is everywoman’s journey.

“You must become a shaman, a great master to get under, over, above, around, and through cancer. Cancer is a relentless teacher.”

Conventional and alternative medical treatment methods helped Ani discover her sweet truth, her deepest wisdom, and her boldest voice. She invites us, and the worldwide medical and scientific community, to join her and to find a Compassionate Cure for Cancer® NOW.