Here is a thought for you: “a human being is not suppose to get sick…”, why do we get sick?

THIS ISSUE’S TESTIMONIAL: ( Life into my dried bones )

” Thanks for the BAC, I need to let people know about this wonderful stuff. I feel like God has used your Bio-Algae to breath life into my dried bones. My wife is thinking that I have become like a new man in only 6 days. Before I was always so tired, now I have energy that I have not had in years. With my last Lung function test showing that I had less than 15% of my lungs left, I just though that the fatigue was part of the disease. I have been making arrangements to move to a lower elevation because I could not get enough strength to exercise and without exercise, I was getting weaker by the day. With BAC, I have done more in the last 5 days than I have in the last 5 months. This is nothing short of a miracle and I know I would have to give the disclaimers to people letting them know that I am extreme case and maybe not everyone will have the same results. Thanks Larry “

This month I added another section at www.themagicisbac.com. In this BioNews I present you with results in Fertility, Fecundity and Viability when using BAC in various animal study in Russia.

Fertility, Fecundity and Viability with BAC

Fertility, without fecundity and viability would not be. Let me define those terms as their interaction will become apparent in the text to follow.

Fertility is a measure of reproduction: the number of children born per couple, person or population. Fertility in all species, human alike, displays astounding mechanisms and depends on factors of nutrition, sexual behavior, instinct, endocrinology, timing, way of life, and emotions; and human fertility a little more complex when adding, economics and culture.

Fecundity, derived from the word fecund, generally refers to the ability to reproduce. In biology and demography, fecundity is the potential reproductive capacity of an organism or population, measured by the number of gametes (eggs), seed set or asexual propagules.

Viability: Viability means in general “capacity for survival” and is more specifically used to mean a capacity for living, developing, or germinating under favorable conditions. In pregnancy, viability refers to either: an early stage pregnancy that has a chance of reaching full-term and a live birth; or the shortest length of pregnancy after which a new born prematurely has a chance of survival.

During animal research projects, sponsored by the Academy of Science and Ministry of Nutrition of the former Russia, fertility fecundity and viability was demonstrated in many ways and in different species. Rather than detailing the physiological mechanism of fertilely, fecundity and vitality all of which can be found in many books; or demonstrating the specific mechanism of each result or benefit, I will describe only one physiological example and hope that you can make the link between, or understand the relationship of nutrition (and BAC) and fecundity.

When consuming BAC, most species were observed to be more energetic, to have more vitality, and in cases, increased energy and strength.

Often in the research with BAC, spermatozoid count and its motility became more elevated in several of the species tested. Spermatozoid count is a function of testosterone, cell splitting and other energy and metabolic factors. Motility is a biological term which refers to the ability to move spontaneously and independently. In terms of fecundity it describe the capacity of the sperm to reach the egg.

One partial explanation of this results is associated with increased ATP energy resulting from a better mitochondria Krebs cycle metabolism. When you take a look at the spermatozoid you can understand the importance of energy required for its flagellum to propel it towards the egg. The key to the spermatozoid motility is in its middle section (see diagram). This middle part, immediately behind the head, contains numerous mitochondria. This section respire sugars in the semen to generate ATP at the Krebs cycle within each mitochondria to provide the strong energy required for movement (motility) of the tail. 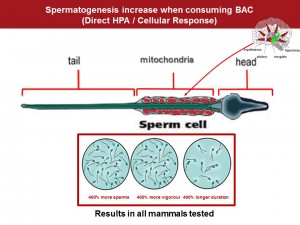 The Krebs cycle is the conversion of food’s carbohydrates, glucose and fats into ATP. ATP is the abbreviation of Adenosine-tri-phosphate. The three phosphates are attached to the sugar component (a ribose bound to Adenosine) through high-energy bonds. Especially the third phosphate stores a lot of energy when bound to ADP. Releasing two phosphates from the sugar, results in AMP (Adenoside-mono-phosphate), inorganic phosphate, and energy.

It is this energy that can be passed on to other molecules, for instance to enable chemical reactions that are endotherm (require energy to take place). ATP is the ‘sugar lump’ of a cell. It is an efficient way to temporary store energy that can quickly be released by one reaction. The energy is stored in the form of chemical bonds, but can be converted into electrical energy, into other chemical bonds, or into power (by contraction of muscle cells). In the case of cell membrane potential, it is ATP that drives ion pumps (complex proteins that span the membrane) to restore an electrical potential.

I am hoping that after reading the many benefits across the several species, the reader will be able to connect the dots and jump to the conclusion that “BAC being so good across those species, it stands that it may be so good for human” If I am left with motivating the reader to use it for their pets or animals, I will be happy.

Going back to the concept of BAC being an extremely efficient cerebral or brain food, it is obvious that all physiological metabolisms are benefited when consuming BAC, in animal and human alike. Next, from the many benefits obtained during research conducted in Russia, I am selecting only those results or benefits having to do with fertility, fecundity and viability.

During several animal research projects, sponsored by the former Russian Academy of Science and Ministry of Nutrition, fertility fecundity and viability was demonstrated in small and large species, and proven in large trials with thousands of animals, even millions considering research conducted on a 1.5 million egg laying poultry farm.

Poultry Research: In Moldova, from 1985 to 1995 a 1.5 million egg laying poultry farm that was plagued with cancers and low productivity, was selected as a main center for algae research. Beside resolving the cancers, many productivity benefits and results were observed and quantified as 20% productivity increase.

Pig research: A 54,000 heads pig farm near Voronege, was plagued with some cancer and low productivity. During this project sponsored by the Ministry of Nutrition the following results were observed:

Dairy cow research: A 15,000 heads dairy cow farm was plagued with some cancer and low productivity. During this project sponsored by the Ministry of Nutrition the following results were observed:

Mink research: In Siberia, hundreds of mink farms totalling more than 10,000 animals were affected by various cancers and low productivity for this important soviet industry. During this project sponsored by the Ministry of Nutrition the following results were observed:

Dog research: In this informal study, hundreds of dogs, the majority German Shepherds were observed during several years. The dogs were used in Moldova to guard the poultry research farm from foxes and other predators.

Other Research and Cases

Since BAC was introduced in North America in 1999, there has been several instances of fertility reported with animals, in some cases as anecdotal reports, in other cases as part of semi-formal research projects. Find a few listed here:

In other clinical research conducted at the University of Hawaii, spirulina caused the fertility of quail to go up to high levels (96. 1 %), significantly higher than the quail on a standard breeder diet.

In other research, it is reported in many Aviaries to nearly double production of finches, canaries and hookbills.

People and Fertility: When consuming BAC, most people report a sense of increased energy and strength. There has been many cases of fertility or other benefits reported anecdotally by people using BAC:

Introduce Bio-Algae Concentrates (BAC) in your life, as a great shortcut to brain health, as an aid in restoring cellular health, endocrine health, energetic coherence, and sexual health. I recommend you eat BAC daily; an extremely efficient food, the best supplement on earth, a blend of microalgae with extraordinary nutritional values.