” Every great advance in natural knowledge has involved the absolute rejection of authority. “

“ I’m so glad I found you so many years ago! I am now 6.5 years cancer free without the radiation follow up they wanted me to undergo…and as you promised, I have just had my Thyroid meds cut in 1/2 AGAIN…..(at least, the active T3 Portion of my compounded Thyroid). Perhaps the day will come when I no longer require the meds at all….I await the day. (smiles)Wishing you all the best the world has to offer, Naturally!

Everyday I receive questions about health, about bio-algae concentrates (BAC) and other topics. And quite frequently I am asked wether BAC contains this or that nutrient; most frequents are calcium, iodine, iron, COQ10, pollysacharides, amino acid, glutathione,etc. Well for this month’s letter, I thought I would reply to one such question received yesterday:

“Roland, with BAC, vegetables and fruits, are we getting enough glutathione?”

Most people asking this question are influenced by the frightening glutathione deficiency theory that goes on like this “Glutathione Deficiency leads to Many Diseases and Health Issues.” Let me remind you that there are dozens of such frightening deficiency theories circulating around in any one year, and several linger for decades, and longer; remember all the hype about Vitamin C way back in the 50’s, then for a while each vitamin became critical; soon some smart marketer invented multi-vitamins; still separate

ly came the B Vitamins, and B12 was made famous by the meat industry fighting back the vegetarian movement; many of the minerals made the list, soon came multi-minerals; let’s not forget how Vitamin E was touted as the cure all for heart and joint diseases, even for cancer; along came the miracle cure COQ10; the Omega 3’s are still high on the list; and now none more sizzling than Vitamin D! This one is so hot that it’s avid proponents have you believe that “if you don’t take your D, you will die soon of cancer or heart attack.”

Are you to take each of these nutrient as a supplement? What about Walter Breuning the World’s Oldest Man who celebrated his 114 birthday in Montana this year? Did he take all those supplements? He says his secret to long life was to stop overeating, he started eating just two meals per day at age 66. He says “overeating is the number one killer in America.”

Reduced L-glutathione, most commonly called glutathione or GSH, is a powerful naturally occurring antioxidant in all our cells. It is a tripeptide composed of the amino acids glutamic acid, cysteine and glycine. Glutathione is found in all cells in the body, including the bile, the epithelial lining fluid of the lungs, and at smaller concentrations, in the blood.

The highest concentration of glutathione is found in the liver, making it critically important in the detoxification and elimination of free radicals. Accumulation of these dangerous compounds can result in oxidative stress, which occurs when the generation of free radicals in the body exceeds the body’s ability to neutralize and eliminate them. Free radicals are highly reactive compounds created in the body during normal metabolic functions; they can also enter the body through the environment.

Metabolically, glutathione has many functions. For example, glutathione plays a substantial role in the functioning of the body’s immune system and plays a key role in intermediary metabolism, immune response and health, though many of its mechanisms and behavior await further understanding. Its antioxidant property makes it vital to white blood cells (lymphocytes, as it allows them to reach their full potential during the oxygen-requiring activity of the body’s immune response. 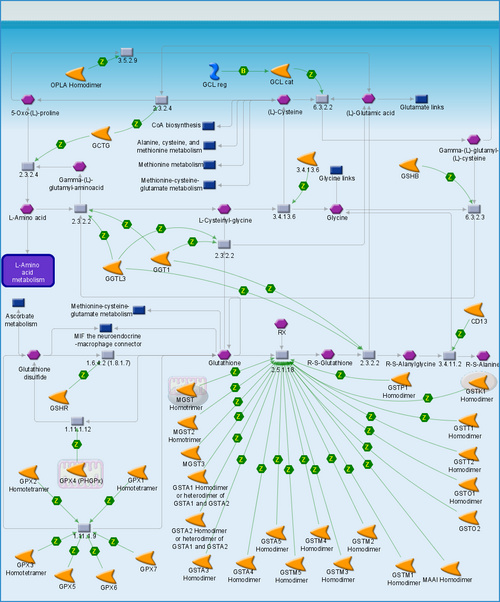 Accompanying the glutathione deficiency theory, there is often a pitch that may go like this example: “providing supplemental mega doses of the amino acid cysteine from pharmaceutical-grade milk serum protein isolates, will allow cells to synthesize and replenish their glutathione stores”. The businesses built around this kind of frightening pitch are in the thousands… I looked it up on Google… it’s amazing… and know that the same hype happens around every other nutrient and/or metabolic human deficiency.

Unfortunately, what is often not shared with this glutathione theory and most other similar theories, are alternative and relevant facts and other means of resolving the deficiency, for example the simple facts that: many foods and diet, and/or lifestyle changes will stimulate glutathione production; a simple jog and a good meal will stimulate glutathione production too; meditation and a good salad will do too; and what about “simply not overeating?”

A capsule of BAC contains ~50% of amino-acids comprising all known amino-acids, including cysteine. More importantly BAC is a holistic targeted approach “aimed at increasing brain health which restores whole body health” rather then a palliative approach “targeting a specific deficiency” like “cysteine to stimulate glutathione.” BAC nourishes efficiently the cells of the body and those of the brain hypothalamus-pituitary axis which in turn regulates all metabolisms of health in the body including the production of glutathione.

In ending, let me point out that in animal study in the Soviet Union and now in Canada, when BAC is fed to dairy cows (and other species) it allows for reduction of daily protein (amino acids) feed for each cow by 1.25lbs while increasing overall productivity by ~20%, including an increase of 3 gallons in each cow’s daily milk output. When consuming BAC, there is improved protein uptake and as important; improved protein synthesis and protein utilization in each cell of the body. Obviously this implies that there is a dramatic increase in glutathione uptake and glutathione production.

When Michael Kiriac, PhD compares the hypothalamus-pituitary axis to “the Genius within”, he reminds us that it is more efficient to stimulate the master organs of the brain than to attempt supplementing each deficiency of the body one at a time; you will soon be taking hundreds of supplements if you fall for deficiency theories.

“If you can increase brain health, the rest of the body is a no brainer”