Yet this is health: To have a body functioning so perfectly that when its few simple needs are met it never calls attention to its own existence.

That’s worth quite a bit

“ In 2003, a friend in Denver told me about something called BSF-BioSuperfood. I started taking it then and here’s the report: I haven’t had a cold or flu since, which has been 8 years! That’s worth quite a bit. “- Posted product review, Anonymous, May 2012

MARTIAL ART OF WELLNESS ( One Disease – One Medicine )

As most of you know by now, in the spirit of The Martial Art of Wellness, I am committed to demythifying either substances, supplements or certain concepts of health that I believe to be incorrect or just plain wrong. This month I am presenting you with food for thought about the big business “myth” that is medicine. In doing so, I hope to increase your awareness and free you from the constant and often misleading dogma and brainwashing that occurs on the television, on the radio, by doctors; natural and conventional, and in thousands of articles in print and on the internet. As wellness warriors, knowledge should come as number one in your arsenal. Only then will you be able to make the right choices for your wellness.

The conventional medical model lists thousands of diseases and thousands of drugs for treating their symptoms. More than 40% of Americans take at least one prescription drug and one-in-six takes at least three. There are currently over 1000 approved cancer drugs. This allopathic approach has you taking a pill for cholesterol, a beta-blocker for high blood pressure, a calcium supplement for your bones, and so forth. In most cases like with diabetes or hypertension, drugs/remedies are prescribed for alleviating or controlling the symptom(s) while the initial causes of the disease are rarely addressed. Often, alternative medicine practitioners work allopathically as well when suggesting enzymes for poor digestion, saw palmetto for prostate support, vitamin C for preventing colds, etc. Within this model, not many try to make sense of the fact that improper diet, too much food, pollutants and stress are the causes of most diseases.

THERE’S ONLY ONE DISEASE = CELLULAR DISEASE

Let us demystify diseases. We don’t have to be scientists to remember that we are made up of hundreds of trillions of intelligent living cells, which in turn make up what we perceive as organs, bones, tissues, blood and brain. And with that in mind, is it not an obvious biological fact that diseases begin and reside at the cellular level, and that unhealthy cells lead to unhealthy organs which lead to deficient metabolic activities perceived as symptoms, which we call disease? It is safe to say that by the time a disease and its symptoms have been diagnosed, the cause(s) that led to the disease have been manifesting in the body’s cells for some time. We don’t “catch” diseases; we let them happen. Let’s walk through cellular disease in four steps:

At this stage of a degenerative or chronic condition, the body suffers from cellular exhaustion (sluggish Krebs/ATP energy), poor assimilation of nutrients, insufficient detoxification and elimination, deficient protein synthesis, sluggish osmosis of water (dehydration), and/or deficient oxygenation (hypoxia). Due to inefficient flushing of mitochondria’s acid ashes, there is accumulation of debris inside the cells, cellular and blood pH is jeopardized. There is likely chronic acidity and resulting acidosis. These conditions will lead to chronic inflammation, infestations of micro bacteria and parasites (fungus, yeast, Candida), accumulation of the “bad” fats (high cholesterol), and crystallization of fats and other unassimilated debris into plaque and arthritis. Digestion and elimination are compromised. The body has lost its ability to rapidly detoxify, heal and regenerate itself, leading to a vicious cycle. 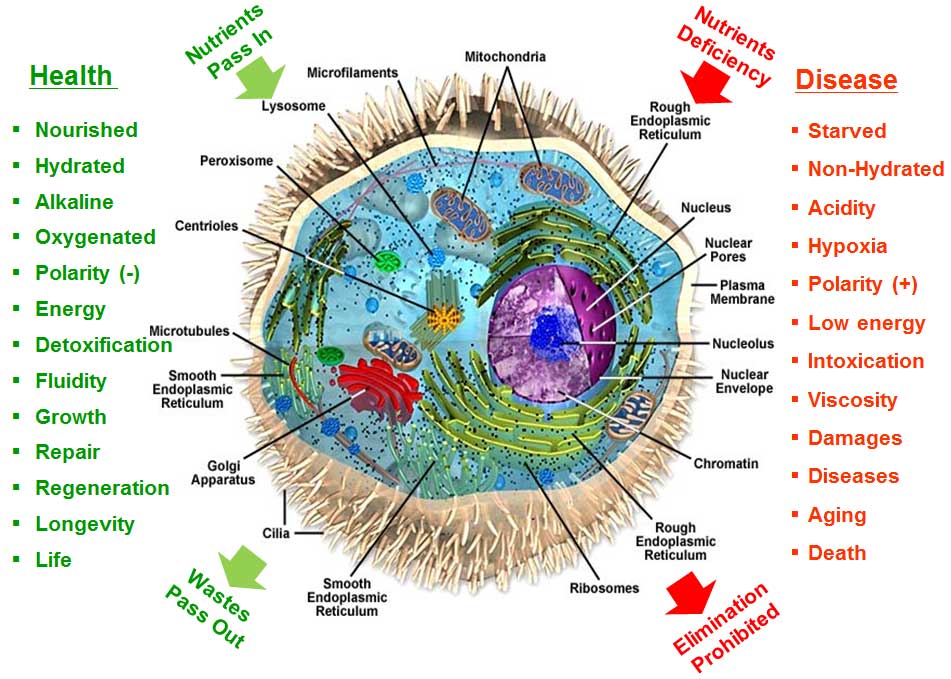 THERE’S ONLY ONE MEDICINE = CELLULAR MEDICINE

How do we prevent this cellular degeneration and restore cellular health? In our culture, there is a powerful reliance on using external medicine to treat diseases and ailments. Yet this is far from the reality that our cells themselves are the medicine. But for cells to conduct their healing functions, energy is needed and that energy can only be derived from food. Our cells perform a myriad of voluntary and involuntary activities. There is not a single moment when our cells are at rest and do not require energy. Even when resting (i.e. during sleep) energy is required for involuntary processes of the cells to support digestion, respiration, circulation, etc. This energy is supplied from carbohydrates, proteins and fats derived from foods. If we provide our cells with energy, each cell will perform their functions of self-creation, self-regulation and self-healing. As opposed to the interventionist model, I call this approach “getting out of the way of health”. Let’s walk through the way to regain cellular health from this energy perspective:

EAT TO LIVE vs. LIVE TO EAT

Our bodies were made with sensitive systems that prompt us when to eat and when to stop eating. We were designed to eat to live. It is when we disregard these systems that we overeat. Living to eat can lead to obesity, which can also lead to a myriad of other unwanted effects such as heart disease and diabetes. While our individual situations may not always favor eating to live, we should still try to adopt this practice, as it will lead to longevity and improved quality of life. Eat to live rather than live to eat, applying consciousness and efficiency to your selection and consumption of foods.