Take charge of your prostate

When you exercise regularly this is an investment that is put into your health bank and constantly gains interest regardless of your weight. This is a great lesson for all those people that love to tell the story of some unhealthy person that lived to be 100 years old. Sure, this can happen, but for every unhealthy person that lives to be 100 there are hundreds of other unhealthy people that never lived to be 40 years old because they were not taking care of themselves. And, for all those people that love to tell the story of one young healthy person that died young, there are hundreds of other stories of people that lived to be very old because they were taking care of themselves. All of this stuff basically comes down to probability, and of course no one is given a guarantee that they will live longer if they exercise and maintain a healthy weight, but who gives a darn – I am going to side with the higher probability here and I refuse to side with the improbable here because most of us live by trying to increase our odds or improving our probabilities.

I no longer wake up at night!

MARTIAL ART OF WELLNESS ( Take charge of your prostate )

As most of you know by now, in the spirit of The Martial Art of Wellness, I am committed to demythifying beliefs about substances, supplements or certain concepts of health that I believe to be incorrect or just plain wrong. This month I am presenting you with information about prostate health. We men do not like to talk about this topic openly, even to close friends. But statistics do not lie: between the ages of 40 and 60, one in every two men will experience a swollen prostate accompanied by symptoms such as difficulty urinating. As wellness warriors, knowledge should be the first weapon in your arsenal. With knowledge, you will be able to make the right choices for your path to wellness.

Take charge of your prostate

This article is adapted from a French article published in the newsletter, Sante et Nutrition, and available online at www.santenatureinnovation.fr.

The statistics get worse: by age 80, 90% of men will be affected by prostate issues! The fact is that most of us remain passive while the problem worsens, and we even forget the simple happiness of being able to:

That’s why I am sharing the following information with you today about natural ways to maintain and regain prostate health.

Be wary of the “too-easy solutions” from conventional medicine

Conventional medicine offers two classes of drugs to treat prostate problems. Neither one nor the other is satisfactory in the short or long run.

Difficulty urinating that appears with aging in men is caused by swelling of the prostate, a gland that is located below the bladder, and through which passes the urethra, the urine evacuation canal. 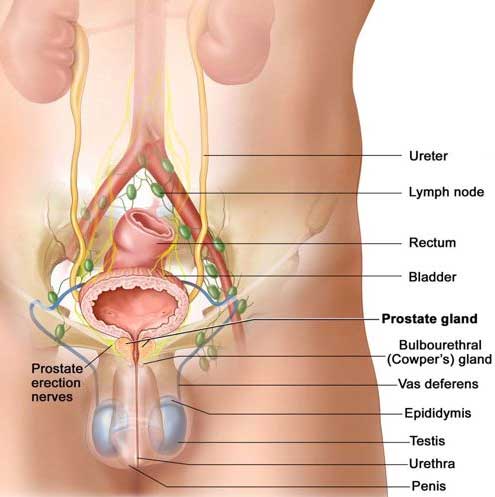 With age, the prostate swells and often compresses the urethra, preventing the bladder from emptying properly, which gives men an unpleasant, almost permanent feeling of having to urinate. This is not just an impression, as the bladder actually remains partially filled.

To fight this disease, conventional medicine has had two “brilliant” ideas so far:

Fortunately, some researchers decided to look deeper to try and tackle the problem. They tried to understand what causes the swelling of the prostate instead of just preventing it chemically, and to find more efficient remedies. One of them, Thierry Souccar, is a researcher in France. Dr. Souccar has specialized for 25 years in nutrition and is the author of the bestseller, Milk, Lies and Propaganda. (1)

He has worked with other famous researchers in nutrition, the biology of aging and advanced natural medicine including Nobel prize winner Linus Pauling, Professor Walter Willett, head of the School of Public Health at Harvard University, and research teams at Johns Hopkins, Tufts University, the University of Texas and French research teams, especially the Inserm research unit of Prof. Etienne-Emile Baulieu.

He also wrote thousands of articles for the mainstream press (Le Nouvel Observateur, Science & Future), and participated in numerous radio and television interviews for a very wide audience (including the Envoyé Spécial).

On the issue of enlargement of the prostate – known in scientific terms “benign prostatic hyperplasia” or BPH – he has conducted extensive research on its causes and remedies.

Getting to the point, you should know that the prostate swells when you have lower levels of testosterone, too much dihydrotestosterone and estradiol, a female hormone that men produce in small quantities when they are young, but more and more over time, especially if they gain weight (estradiols are made in adipose tissue).

What some scientific research has uncovered: